News, updates, images and many more stuff about The Olfactory and other olfactory news

Posted by Super User on Wednesday, 25 April 2018 in The Olfactory Blog LONDON— We are pleased to announce that the Contribution to Scent Culture Award goes to Peter de Cupere for his lifetime and ongoing achievements!

The award is made public in the 5th annual Art and Olfaction Awards ceremony, on April 21, 2018 at The Tabernacle in London.

For more than 20 years Peter de Cupere has been the most in-depth artist in developing conceptual artworks in the field of Olfactory Art.

The late Jan Hoet (Documenta 9) was 20 years ago the only prominent Museum Director and Curator who gave Peter the definite kick on his ‘backside’ to keep persisting and develop his practice despite all the non-comprehension and … the sometimes bad smells. Today Peter has overcome all this and there he stands with his great nose and clouded olfactory brain. Truly exceptional and so powerful!

With an oeuvre that consists out of more than 700 works of art related to the olfactory perception of social, cultural and environmental contexts, this award for the ‘Contribution to the Scent Culture’ in the contemporary art and perfumers world is truly a deserved award.

His works were presented in more than 200 exhibitions over the whole world. He gave lectures from Berlin, London to New York and collaborated with various institutions, museums, universities and companies. He experiments with smells and uses fragrances to question various problems of our society.

He is a lecturer at the PXL–MAD School of Arts in Hasselt (BE) and is researching into the use of smell as a context and/or concept for the work of art.

He published recently an overview book of 472 pages, that includes more than 500 works of art and 22 scratch & sniff images. More info: www.scentincontext.com or www.stockmansartbooks.be

This award is given to one outstanding person who made significant contributions to global public awareness of artisan, independent and experimental practices with scent in 2017.

Each Art and Olfaction Award winner receives The Golden Pear, which continues to cement its status as a prestigious achievement in the perfume and olfactory art world. 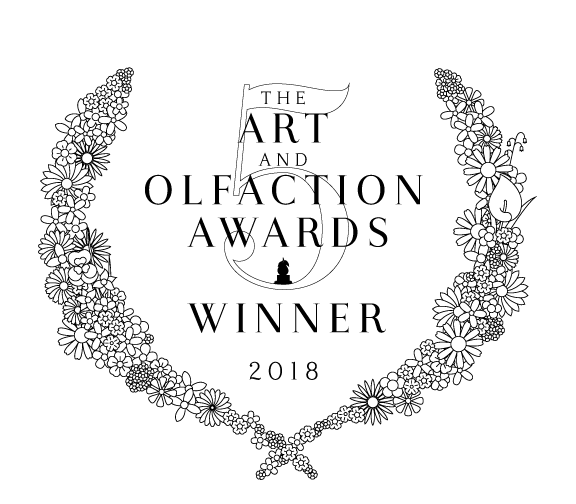 THE ART AND OLFACTION AWARDS

Awarded to just four perfumes, one experimental scent project and two special awards a year: The Contribution to Scent Culture Award and The Aftel Award for Handmade Perfume

The Art and Olfaction Awards are designed to raise public interest and awareness around new developments in independent perfumery. The Awards, established in 2014 by The Institute for Art and Olfaction, are given to outstanding creators in the categories of independent, artisan, and experimental perfume from across the globe, chosen for works released in 2017.

The winners this year were, in the artisan category, Chienoir by BedeauX and Club Design by The Zoo; in the independent category, Eau de Virginie by Au Pays de la Fleur d'Oranger and Nuit de Bakélite by Naomi Goodsir; and the Sadakichi Award, Under the Horizon by Oswaldo Maciá.

Each Art and Olfaction Award winner received The Golden Pear, which continues to cement its status as a prestigious achievement in the perfume world.

The evening began with a lively champagne cocktail presented by Pochpac in the Tabernacle, where guests were able to smell each of the finalists. When summoned into the theatre, guests were treated to samba and bossa nova by Samba do Chapéu. Miguel Matos, a Portugal-based journalist and experimental fragrance maker, emceed the evening with humor and grace.

The winners each gave heartfelt speeches, many of them touching on the close-knit community that has formed around independent, artisan, and experimental perfume. When receiving the Aftel Award, Isabelle Michaud of Monsillage invoked the spirit that permeates these annual awards: “There is a punk rock of perfumery—people who just say, ‘**** it, I’m going to make perfume.’ And that’s what these awards are about.”

Andy Tauer, Swiss perfumer and Art and Olfaction Awards judge, pointed out the tireless efforts by Saskia Wilson-Brown and the Institute for Art and Olfaction team. “Saskia doesn’t like it when we thank her, so I will just say: ‘We love you,’” said Tauer.

Finally, world-recognized fragrance journalist Katie Puckrik delivered a brief closing remarks, before the Institute for Art and Olfaction Board Member Julianne Lee announced that the Institute will be operating a pop-up in Amsterdam in conjunction with Mediamatic from 16 July 2018 to 11 August 2018.

After the awards, attendees congregated for an unofficial afterparty, where discussions about scent went deep into the night. It was a fitting end to the Awards, which began with the two-day Experimental Scent Summit on 18+19 April 2018, an important series of presentations by some of the greatest intellects working in olfactory art, organized for the second year by the Institute for Art and Olfaction in collaboration with artist Klara Ravat.

THE WINNERS FOR THE FIFTH ANNUAL ART AND OLFACTION AWARDS

The artisan category is for perfumes that are formulated by the same person who owns or co-owns the company.

The independent category is for brands that employ an external contract perfumer or fragrance house to create the perfume formula.

Under the Horizon
by Oswaldo Maciá (Colombia/ UK)
with Ricardo Moya, IFF

Given to one outstanding person who made significant contributions to global public awareness of artisan, independent and experimental practices with scent in 2017.

Given to one outstanding small batch perfume that was 100% perfumer-created, in-house, with no use of outsourced compounding or expansion at any stage of the process.

THE FINALISTS FOR THE FIFTH ANNUAL ART AND OLFACTION AWARDS

Wonderly
by The House of Oud (Italy)
Perfumer: Andrea Casotti

The Library of Smell
by Hisako Inoue, with Anne Marr (Japan/ Germany)

The Institute for Art and Olfaction is a 501(c)3 non-profit based in Los Angeles, CA. The Institute for Art and Olfaction advances public and artistic engagement with scent. We do this by initiating and supporting arts projects that utilize the medium of scent, by providing accessible and affordable education in our experimental laboratory as well as in partnership with institutions and community groups, and by celebrating excellence in independent and artisan perfumery through our yearly award mechanism, The Art and Olfaction Awards. Through these efforts, we extend the world of scent beyond its traditional boundaries of appreciation and use.
MORE INFORMATION:
http://artandolfactionawards.com/
http://artandolfaction.com/